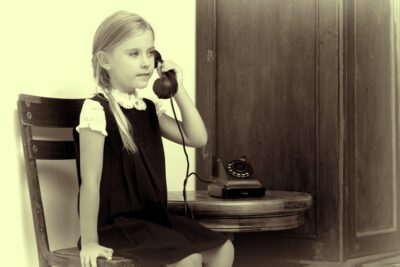 How far back can you remember telephones? If you’re around my age you may remember when there was only one in the house, and it hung on the wall in the front hall. It was black and had a round dial. Phone numbers began with letters, and you may have shared your line with another family.

But improvements were inevitable. The wall phone morphed into a boxy thing and came off the wall and sat on a “telephone table,” only to be replaced by a light-colored, slim-line phone with push buttons. Then, came the princess phone every teenage girl had to have, the first clunky car phone, the Blackberry (which President Obama didn’t want to part with), the flip phone, and finally, the smartphone, which keeps getting smarter.

Today’s smartphone is a brilliant little pocket computer that does so many things, it’s mind-boggling. According to an article by Edward C. Baig in the  AARP Bulletin, “Smartphones are the Swiss Army knives of technology.” Most of us don’t even realize their power and versatility. Did you know, for instance, that your smartphone …

My smartphone—an iPhone 13—is about 2½ by 5½ inches. My Apple Watch, which is a computer on my wrist, is miniscule by comparison, but it has many of the same features.

Everything changes, and nowhere is that more apparent than with the evolution of the telephone. One can’t imagine what it will look like or be able to do in its next incarnation. It’s hard to keep up with technology evolving at warp speed, and for older adults, it’s all too easy to throw up our hands in defeat.

It may seem too complicated for the average human, but we really don’t need an engineering degree to operate a computer or a smartphone. We may never need the tape measure, calculator, magnifying glass, or pedometer. On the other hand, we may want to snap a picture, hear a weather report, or use the navy system, all of which are as easy as pushing a button.

For more information, check out https://www.aarp.org/bulletin/

Assessing the Impact of COVID-19 by the Numbers

Shining a Spotlight on the Older Americans Act

The Power of Vaccines