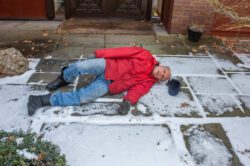 We’ve all heard about the dangers of falling, but somehow, we don’t think those warnings pertain to us. Like so many other unforeseen events in life, we tend to think that other people fall, but we don’t. Or at least we never have. It only takes one tumble to make us realize how vulnerable we are to the hidden dangers all around us.

I learned this the hard way, which is the way most of us learn life’s lessons. I tripped over a big, fat pillow and hit the floor hard. The room looked like a crime scene with blood everywhere. I looked even worse. I had a gash down the side of my face and several cuts and bruises in other places, all of which were bleeding profusely. The next day, I had a huge, dark purple and pink black-eye, and my eye had swollen shut. I was covered in bandages and spent a week putting ice packs on my eye to reduce the swelling; the intense purple patch took much longer to fade.

All that because of a carelessly placed pillow—something I didn’t even remember leaving in that spot. This was a wake-up call for me, as it should be for anyone. It may be the first time you have given any thought to other things that could trip you up, but it shouldn’t be the last. The truth is the sixth sense that kept you from tripping over items in the past may not be as sharp as it was used to be. If you aren’t aware of what is around you, your home can easily turn into an obstacle course.

The obvious question is what to do about this problem before you take a spill. The answer is to take a room-by-room inventory of what is out of place, on the floor, making a mess, or posing a risk of tripping. As you look around your home, this may seem like a daunting challenge, but it doesn’t have to be.

Start small, with one room. You are going to “declutter,” which is the current word for straighten up. You couldn’t have picked a better time to try your hand at decluttering, because Amazon lists two thousand books on the subject. Some of them are so interesting, you may be tempted to abandon cleaning and just sit down and read.

Begin with your living room or den. First, take a good look around you. What have you inadvertently tripped over or bumped into in the past—footstools, a coffee table, scatter rugs, a pile of magazines, abandoned shoes? Just pick them up (if you can) and move them out of the room. (If you can’t, put a stickie on them to remind you to ask someone to move them for you.) Put them somewhere where you can decide later what to do with them.

That’s the pattern you can follow for every room. First, do a visual inventory; then pick up the offending items: towels and laundry on the bathroom floor; dropped clothes, books, blankets in the bedroom; power strips, extension cords, loose edges of carpets in any room; and dropped items or forgotten toys (if you have grandchildren) on the stairs that you meant to take up or down later.

It’s easy to feel overwhelmed by the thought of decluttering a whole house or even an apartment. But nothing could be more important than saving yourself from a fall. Once you have fallen, your confidence may be badly shaken , which is almost as bad as getting hurt. And getting hurt is real possibility. Yes, going through every room can be a big job, but you don’t have to do it all at once. Take your time and think about the aesthetics, as well as your safety. Getting rid of superfluous “stuff” is going to improve the appearance of your home. You’re going to feel more comfortable and confident once you’ve scaled down the clutter and hazards.

What Benjamin Franklin said about an ounce of prevention being worth a pound of cure is as true now as it was back then. Think of that quote as your mantra as you attack each room.

PrevPreviousIs it time to face the subject of a loved one’s end of life?
NextFacing Your Fears About MoneyNext