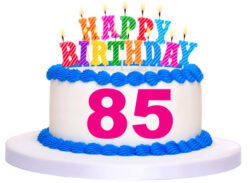 Every time I hit a birthday that ends in a five or a zero, it seems monumental. Some of them are milestones, such as sixty-five, when I was eligible for Social Security and Medicare, or eighty, an age I personally considered “elderly.” Some were delightful, like twenty, the year I became engaged; twenty-five, when I had a baby; and thirty-five, when I was named editor of a city magazine. To balance out those positive events, I remember thirty, which I dreaded, although I don’t remember why, and sixty, which was surely the end of the world.

Of course, those numbers to which I attached such significance didn’t have the same effect on others. Some of my friends looked forward to being sixty, while I had the blues for months. Some of this preoccupation with fives and zeros may have been the fault of Gail Sheehy who drew attention to them in her books, Passages and New Passages. Those books guided so many of us through significant turning points in our lives by telling us what we could expect at each stage.

The only problem was that Ms. Sheehy stopped writing about different ages when she got to her own. In Passages, she didn’t even reach fifty and in New Passages, abandoned ship long before mentioning old age. That is an issue for me because I could really use a third book. I have just marked one of those significant birthdays—eighty-five, which is officially the beginning of the “oldest old.” Now, that is something to contemplate.

Google “what it is like to be eighty-five years old” and you will find “Adults who are eighty-five or older may walk a bit slower, use a cane, or have trouble hearing, but this does not mean that all older people will need a cane or a hearing aid. And even though some older people have physical limitations, they can and do enjoy life.”

The above description is hardly a complete one. And, of course, among one hundred older people, there will be one hundred versions of what it’s like to be eighty-five. I can only describe my version. I do walk a bit slower. I don’t use a cane, but I do use a walker when I’m out and about (due to a couple of less-than-perfect joint replacements). My hearing is good—probably my strongest sense. I do have physical limitations, but they don’t interfere with my ability to enjoy life.

That is not to say that turning eighty-five doesn’t make one stop and think. No matter how comfortable you are with aging and even the idea of dying, no matter what your physical condition, you are in the last chapter of your life. How you live that chapter is pretty much up to you.  There are not many things in our control as we grow older, but your attitude is the one that is. Only you can determine what that will be. It matters because your attitude will guide the way you live the rest of your life, however many years that may be.

PrevPreviousWhat does it take to be happy?
NextCOVID ConfusionNext